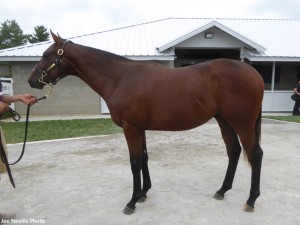 A half-brother to Triple Crown winner and 2018 Horse of the Year Justify dropped the hammer for $950,000 on Monday at the Keeneland September Yearling Sale, but it wasn’t enough to close the deal.

The Pioneerof the Nile colt, out of the Grade 3-placed Ghostzapper mare Stage Magic, finished under his reserve in the sale ring and will return to the Gunther family’s Glennwood Farm in Versailles, Ky., with designs to race him as a homebred. He was offered as Hip 106.

John D. Gunther of Glennwood Farm said the hammer price was “one tick below the reserve,” suggesting that a seven-figure price would have been enough to complete the transaction.

“I just felt that if he didn’t sell around that price, I’d be just as happy racing him,” Gunther said. “I think a lot of people compared him to Justify, Justify being a much larger individual as a yearling. This colt is by Pioneerof the Nile, and quite often, you’ll see Pioneerof the Nile throws a fairly big horse as well.

“This horse is very athletic, he’s got a great mind, and he’s got a lot of class about him, but I think him being a little bit on the smaller side for a Pioneerof the Nile or a half to Justify, it turned a lot of the big buyers away,” he continued. “I’m very happy to race him.”

In addition to the Triple Crown winner, a son of Scat Daddy who stands the Northern Hemisphere breeding season at Coolmore’s Ashford Stud in Versailles, Ky., the colt is a half-brother to Grade 3 winner The Lieutenant, a Street Sense horse who stands at Sequel New York in Hudson, N.Y.

This is the second consecutive year in which the Gunthers have bought back a half-brother to Justify at the Keeneland September sale. One More City, a colt by Will Take Charge, was an RNA at last year’s sale with a final bid of $1.75 million, and he is training toward his debut start for his breeders.

“He was a big colt,” Gunther said about One More City. “He looked a lot like Justify. We’ve been taking our time with him. He’s been at a training center, but he just went into another growth spurt, so I don’t think we’ll start with him until early in his 3-year-old year. He’s going to take a lot of time.”