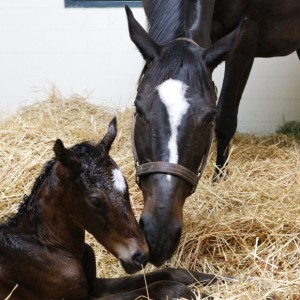 Zenyatta with her May 2017 filly

A movie that tells the story of one of the greatest race mares of all time – Zenyatta – will be premiered at Del Mar this Saturday shortly after the running of the track’s 10-race card. It will be shown free of charge in the paddock on the large video board there.

“ZENYATTA, ‘Queen of Racing’” is a documentary that runs for 87 minutes and tells the story of a genuine racing superstar. Its executive producer is Jerry Moss, the mare’s owner and a long-time racing owner-breeder who also did a tour as a commissioner on the California Horse Racing Board. Besides his broad racing affiliations, Moss is well-known as a music executive and producer through his founding of A&M records with his partner Herb Alpert. Their marks on the music world were so deep and their discography so extensive that both were inducted into the Rock & Roll Hall of Fame in 2006.

When asked why he decided to produce a feature about his imposing mare, who stood better than 17-hands and weighed more than 1,200 pounds, Moss simply said: “She deserved it.”

Zenyatta raced four seasons between 2007 and 2010 and won 19 consecutive races and more than $7.3 million in purses, all in the capable hands of veteran trainer John Shirreffs. She captured 17 graded stakes with 13 of those designated Grade I. The daughter of Street Cry became the only female to win the Breeders’ Cup Classic when she came with a furious rush under her regular rider Mike Smith to best 11 male rivals at Santa Anita Park in 2009 in a race that is rated among the most thrilling in Thoroughbred history. Her only loss came in the 20th and final race of her career when her late charge came up a head short to the colt Blame in the 2010 Breeders’ Cup Classic at Churchill Downs.

Zenyatta, who was known for her dance steps in the post parade and her locomotive-like charges through the stretch in her races, was named Horse of the Year in 2010 and won Eclipse Awards as champion older female in 2008-09-10. She was inducted into racing’s Hall of Fame in 2016.
Since 2011, the statuesque mare has been a broodmare at Lane’s End Farm in Kentucky. The now 13-year-old has delivered five foals so far and was recently confirmed in foal again, this time to the stallion Into Mischief.

“We’re delighted Jerry has allowed us to show this special feature to the public for the first time at Del Mar,” said Del Mar Thoroughbred Club president and CEO Joe Harper. “Jerry has given a lot to our game and now he’s giving it a lasting remembrance of one of the great horses of our time.”

The feature is scheduled to be available on DVD in the near future. Further information can be obtained at Zenyatta.com