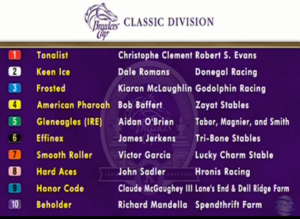 The 1 1/4 mile Classic is the richest of 13 Championships races worth more than $26 million in purses and awards to be run over the two days at Keeneland for the first time ever and will be televised live by NBCSN and NBC. The Classic will be broadcast live at 5:35 p.m. ET on NBC (4-6 p.m. ET). Four Championships races will be run on Friday, highlighted by the $2 million Longines Breeders’ Cup Distaff for fillies and mares at 1 1/8 miles.

American Pharoah drew post position 4 at the draw Monday and with regular jockey Victor Espinoza as the Bob Baffert-trained 3-year-old star closes out his brilliant career before taking up stud duties in 2016. The Kentucky homebred son of Pioneerof the Nile has won eight of 10 lifetime starts, beaten only in his debut last year (5th at Del Mar) and second last out in the Travers Stakes (G1) at Saratoga in late August, following his coronation as first to sweep the Triple Crown since Affirmed in 1978.

Beholder, Breeders’ Cup Juvenile Fillies winner in 2012 and Distaff in 2013, both at Santa Anita, has won all of her five starts this season, including the Pacific Classic at Del Mar against male rivals at the Classic distance. The 5-year-old daughter of Henny Hughes, trained by Richard Mandella, missed her Distaff defense last year at Santa Anita after spiking a fever ahead of the race.

American Pharoah was made the 6-to-5 Twin Spires morning line favorite with Beholder a second choice at 3-to-1 as she breaks from the outside post 10 with regular partner Gary Steven in the saddle.

The ‘wild card’ in the deep Classic field is Michael Tabor, Derrick Smith and Mrs. John Magnier’s 3-year-old Irish-bred Gleneagles, winner of seven of his 10 career starts in Europe for trainer Aidan O’Brien, including the English 2,000 Guineas at Newmarket and St. James’s Palace at Royal Ascot. The son of European champion stallion Galileo will be making his first start ever on dirt in the Classic and first ever beyond one mile.