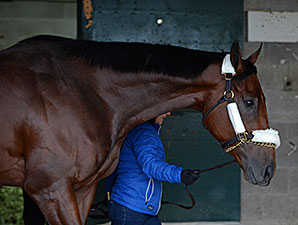 Hall of Fame trainer Bob Baffert didn’t take any chances with Triple Crown winner American Pharoah on Wednesday morning, opting to keep him in the safe confines of the barn rather than send him out to jog on Keeneland’s sloppy main dirt track or the Polytrack training track according to today’s Press release.

The 6-5 morning line favorite in the field of 10 for Saturday’s $5 million Breeders’ Cup Classic, who arrived by chartered jet from Southern California late Tuesday afternoon, was tacked up and walked the shedrow for 30 minutes with regular exercise rider Jorgie Alvarez aboard.

Baffert, who had the hassle of a flat tire on his rental car on the way to the barn this morning, was clearly emotional when trying to process the magnitude of the Breeders’ Cup moment coupled with the inevitably that Saturday will be the last time he will lead American Pharoah over.

Instead of returning home to Baffert’s Southern California base, the colt is staying behind and will be transferred to Ashford Stud in Versailles to begin his stallion career.

“I told them back at the barn ‘Don’t put anyone in that stall’. It’s getting a little bit tough. I feel like his father and feel like he’s my son, so I want to make sure he goes out there and puts on a good performance,” he said.

“It will be sad. It’s going to be emotional. It started hitting me about a month ago, and it hits me when we talk about it (while clearing his throat). He’s been terrific to me. Just watching him train now is (emotional) because I’ve never had a horse that looked like him. It’s been an honor and a pleasure to train him.

“It’s been so incredible that I just want to make sure that when I lead him up there he’s really sharp. I feel the pressure every time he runs. When I send him out there, there is always a little pressure. This is different. I just want him to run his race. As long as he brings his ‘A’ game it is all I ask for. If he gets outrun, he gets outrun. I’m just giving him his opportunity. If he runs his race, we know how tough he is.”

With all that Baffert has been through this year with American Pharoah, who has raced at six different tracks while making history, he said that it seems at times as though they are part of a reality TV show. Through it all, American Pharoah continues to impress with his demeanor and intelligence as well as his extraordinary ability.

Owner Ahmed Zayat, who was at the barn with his son and racing manager, Justin, employs a variety of accomplished trainers across North America and internationally for his vast stable. In addition to Baffert, they include Hall of Famers D. Wayne Lukas and Bill Mott, seven-time Sovereign Award winner Mark Casse, Dale Romans, Rudy Rodriguez, John Terranova, Reade Baker, Tom Proctor and Michael de Kock.

When it was time to choose among them, there was never a question as to whom a young American Pharoah would be sent for his racing career.

“It was a very easy decision. Bob is the most brilliant trainer I have ever known. I have had very, very nice horses and this man has given me more than 22 Grade ones (trophies) and given me so much pleasure. I’ve had horses like Paynter, Pionerof The Nile, Fast Bullet, Bodemeister, and the list goes on. Bob trained this horse’s daddy, Pioneerof The Nile, and it is only natural that he would get the top horse in my barn,” said Zayat.

Baffert will continue to monitor the weather and the track conditions before deciding American Pharoah’s training schedule for Thursday.

“I have no plans now. We’ll make that call in the morning,” said Baffert, adding that he does not anticipate he will school the colt in the paddock before the race.