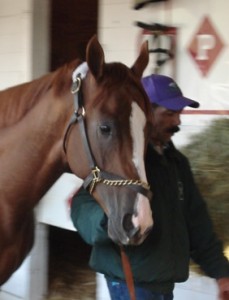 Under the watchful eye of trainer Art Sherman, Kentucky Derby and Preakness winner California Chrome galloped 2 3/8 miles over the main track on a warm and sunny morning at Belmont Park.

It was the first morning on the backstretch for the 77-year-old Sherman, who arrived from California late Monday afternoon and had a quick visit with his stable star, who is aiming to become the 12th Triple Crown champion with a victory in Saturday’s Grade 1, $1.5 million Belmont Stakes.

After schooling in the paddock, California Chrome got a hug around the neck from regular exercise rider Willie Delgado before heading to the 1 ½-mile track, where he jogged four furlongs before turning around for his slow and easy gallop.

“I thought he looked better now than he did after the Preakness,” Sherman said. “I couldn’t believe how much weight he put on. He really looks good right now. Going on the Triple Crown trail, it’s kind of rough. He’s an amazing horse.”

Sherman returned to Los Alamitos Race Course near Los Angeles following the May 17 Preakness, leaving California Chrome with his son and assistant, Alan. The California-bred son of Lucky Pulpit will be the heavy favorite to become the first Triple Crown winner since Affirmed in 1978.

“I don’t think he has to win the Triple Crown to be a hero,” Sherman said. “He’s on a six-race winning streak. He’ll always be my hero. Just to win the Derby and Preakness is good enough for me. If he gets the Belmont, that’s the hat trick. Believe me, I’ll be really satisfied then. I’m the kind of guy that I take one race at a time. I hope we have a good trip and everybody comes away healthy. That’s my main concern.”

Sherman said his last visit to New York came in 2005, when he attended the Breeders’ Cup to cheer on his friend and fellow trainer Greg Gilchrist and his horse, Lost in the Fog. Despite finishing seventh in the Sprint, the 3-year-old earned the Eclipse Award as champion sprinter.

“I am kind of a city guy,” Sherman said. “I like going around, and New York has always been a fun town for me. I remember when I was riding, there was a lot of action when I was a young feller.”

Sherman, who has won nearly 2,200 races as a trainer, sounded confident when asked if California Chrome would run as a 4-year-old should he sweep the Triple Crown.

“We’d like to race him for another year, although I don’t know,” he said. “Sometimes when you’re offered so much money, it’s hard to refuse. I think that the owners will sure run him next year, from what I gather. They just got him insured for a lot of money. You don’t pay the insurance premium and sell him right away.”