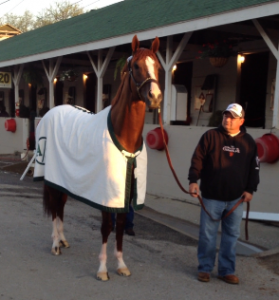 California Chrome schooled at the starting gate for the second and final time Thursday at Belmont Park in the lead-up to the Grade 1, $1.5 million Belmont Stakes on Saturday.

At 6:30 a.m., California Chrome set foot on Belmont’s main track and jogged approximately 1 3/8 miles clockwise before arriving at the starting gate in the 1 1/8-mile chute on the backstretch. There he stood in the gate, backed out, and began an easy 1 ¼-mile gallop outside the cones that had been placed on the muddy main track.

“He was perfect in there,” said Alan Sherman, assistant to his father, trainer Art Sherman.

California Chrome has won six straight races, including the Grade 1 Kentucky Derby and Grade 1 Preakness. He is attempting to become the 12th thoroughbred in history to win the Triple Crown and first since Affirmed in 1978.

Sherman said California Chrome, who is owned by Steve Coburn and Perry Martin, will school in the paddock and gallop tomorrow. He’ll jog on Saturday, the morning of the Belmont Stakes.

“He’s got his lead changes down and everything,” said Sherman. “He’s doing really good on this track.”

Sherman took a moment to analyze the impact of California Chrome’s post position. The colt drew post 2 of 11 at yesterday’s draw.

“It helps that [jockey] Victor [Espinoza] has been riding here all week,” said Sherman. “I’m sure they’ll take a few different runs at him, like they did at Pimlico. As long as he doesn’t get in any traffic problems, I don’t think it will be a problem for him. You can’t move too early on him; you just have to sit as long as you can.”

Sherman continued to stress how California Chrome’s connections will always be grateful for having had the opportunity to win the Triple Crown, regardless of the outcome of Saturday’s race.

“Everything from here on out is a bonus,” said Sherman. “He already has exceeded our expectations. It just has been an amazing ride; I just thank God we get to train a horse like that.”

Yesterday, 45 year-old Alan Sherman became a grandfather when his daughter, Brianne, gave birth to a boy. The baby, named Logan, weighs six pounds and was born in Temecula, Calif.

California Chrome won the first two jewels of the Triple Crown: the Kentucky Derby at Churchill Downs on May 3rd and the Preakness Stakes on May 17. A win at the Belmont Stakes will complete the Triple Crown. The race on Saturday, June 7 will be televised on NBC.