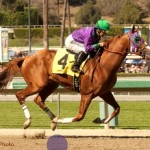 Collectors, “Chromies,” and curators all will be vying for the race-worn winning silks of a champion as well as other prized pieces in a historical opportunity when the California Chrome Vox Populi Charity Auction begins Jan. 29.

This unique, 10-day online auction will feature five museum-quality pieces celebrating California Chrome, the winner of last year’s Kentucky Derby and Preakness as well as the 2014 Eclipse Award for Horse of the Year and the Secretariat Vox Populi Award, which recognizes the horse whose popularity and racing excellence best resounded with the American public and gained recognition for Thoroughbred racing.

The items — all with impeccable provenance and of profound significance — were donated by California Chrome’s owners Steve Coburn and Perry Martin in collaboration with Mrs. Penny Chenery and the Secretariat Archives, to benefit the Secretariat Foundation.

Most notable in this impressive collection are the actual DAP Racing silks worn by Victor Espinoza when he guided California Chrome to his first significant win in the San Felipe Stakes at Santa Anita Park last spring. This piece, signed by each member of the California Chrome team, marks the first time — at least in recent memory — when the original race-worn winning silks of a newly crowned Horse of the Year have been offered to the general public.

The auction also will feature a sculpted bust of California Chrome by the esteemed equine artists Kitty Cantrell and Caroline Boydston, who created the official trophy for the Vox Populi Award, as well as an original oil painting of California Chrome by acclaimed Kentucky equine artist Jaime Corum. The highly sought-after Vox Populi prints released earlier this month at Santa Anita were created and published from this original portrait.

The Vox Populi Auction also will offer two items that represent the storied career of California Chrome’s trainer Art Sherman. One is a 1955 issue of Sports Illustrated, featuring the legendary Swaps on the cover and signed by Sherman, who as a teenager was a stable hand and exercise rider for Swaps’ connections. The other is an exquisite miniature hand-painted pewter figurine of California Chrome commissioned specially for this auction. Only two of these miniatures were produced, and the other Sherman received during the Vox Populi Award presentation as a special reminder of his amazing champion.

Secretariat.com, in conjunction with eBay, will host this first ever Vox Populi Auction. Bidding will begin the evening of Thursday, Jan. 29, and conclude Sunday, Feb. 8. For more in-formation about the auction or the Vox Populi Award visit Secretariat.com

The Secretariat Foundation is a non-profit charitable organization created by Mrs. Penny Chenery to assist the Thoroughbred industry in the areas of research, rehabilitation, retirement and recognition. Mrs. Chenery named the foundation after her great champion to use his enduring appeal to bring greater awareness to the many causes found within the equine-related community. Secretariat Foundation revenue is raised through donations, signing appearances, and the sales of memorabilia and officially licensed products on Secretariat.com.