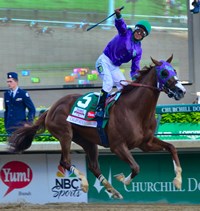 Based on an online vote by nearly 2,000 racing fans, California Chrome’s authoritative win in the 140th Kentucky Derby was named the 2014 National Thoroughbred Racing Association (NTRA) Moment of the Year. The results of the poll were announced Friday, January 15 at the third annual ThoroFan Awards Breakfast at Gulfstream Park Racing & Casino in Hallandale Beach, FL and by press release.

California Chrome went off as the 5-2 Derby favorite coming off wins in four straight starts, including the $1 million Santa Anita Derby, all in his home state of California. Regular rider Victor Espinoza gave the modestly bred son of Lucky Pulpit a perfect ride, sitting just off the early pace in the third position before moving to the lead at the quarter pole. From there California Chrome opened up a five length lead in the stretch and easily held off the late closers to win by 1 3/4 lengths. It marks the second Derby victory for Espinoza and first for Art Sherman, who became the oldest Derby-winning trainer at 77, while propelling co-owners Steve Coburn and Perry Martin to national stardom. This moment received 30.5% of the vote.

Moment of the Year balloting was conducted at the NTRA Web site, ntra.com, and offered voters 10 different images illustrating a range of human emotions as well as outstanding displays of equine athleticism. Finishing second was Wise Dan’s triumphant return from surgery to win the Grade II Bernard Baruch at Saratoga Race Course with 20.07% of the vote.

“California Chrome’s win in the Kentucky Derby was the signature effort by one of the most popular racehorses of this decade,” said Keith Chamblin, NTRA Senior Vice President of Marketing. “This year was arguably the deepest pool of moments we’ve ever had but in the end the fans reminded us that nothing trumps an awesome performance by a legendary horse.”