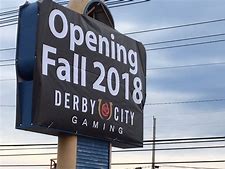 State and local officials as well as members of the horse racing community joined the CDI team to officially open the entertainment facility Sept. 14 to the public.

Derby City Gaming is a unique new venue, boasting 900 state-of-the-art historical racing machines designed in partnership with Ainsworth Game Technology. The décor of the facility pays homage to Churchill Downs racetrack’s deep history in horse racing with references to the Oaks and Derby throughout the property including pictures in the main entrance of the 144th Oaks and Derby winners and the opportunity to view the 145th Derby trophy. The property also features two quick-service, walk-up food venues, a center bar with large format televisions, and seating for over 60 guests to take in all the best sporting action year-round.

Churchill Downs has called Louisville home for well over a century and is committed to continued growth and investment in the city and the Commonwealth through its multiple entertainment venues. The opening of the new Derby City Gaming is another example of CDI leading the way for innovation in the horse racing industry. HRMs at the Derby City Gaming facility will provide an estimated $15 million to $20 million in additional purse contributions to one of Kentucky’s signature industries. Creating larger purses will boost thoroughbred sales and breeding operations throughout the Commonwealth.

“We’re excited to celebrate the grand opening of Derby City Gaming. Not only has this facility created hundreds of jobs and spurred tens of millions of dollars in economic development in our hometown of Louisville, but HRMs will provide desperately needed revenue to Kentucky purses and will help shore up the racing circuit,” said Kevin Flanery, President of Churchill Downs Racetrack.