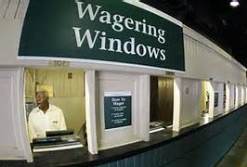 Thought it would be fun to see explanations of most common betting terms. Here are some of the more common types of bets that you can place at Churchill Downs to bet on horse races:

Win, place and show wagers class as straight bets, and the remaining wagers as exotic bets. Bettors usually make multiple wagers on exotic bets. A box consists of a multiple wager in which bettors bet all possible combinations of a group of horses in the same race. A key involves making a multiple wager with a single horse in one race bet in one position with all possible combinations of other selected horses in a single race. A wheel consists of betting all horses in one race of a bet involving two or more races. For example a 1-all daily double wheel bets the 1-horse in the first race with every horse in the second.

While many people love to watch horse racing, many also enjoy placing a bet. So good luck to all on your Kentucky Derby bets!