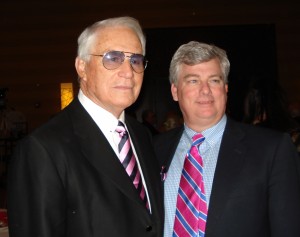 Jockey Calvin Borel wasn’t the only member of the National Museum of Racing and Hall of Fame getting on horses Sunday morning at Oaklawn, the first day of officially timed workouts for the 2020 meeting that begins Jan. 24.

It was also business as usual for D. Wayne Lukas, who was escorting horses to and from the track aboard his stable pony, Scotch. What made Sunday different than the previous 50 or so years in the trainer’s legendary equine career was Lukas, 84, had only resumed riding a few days earlier following back surgery in October.

“It was good until the last couple of days,” Lukas said with a laugh following training hours Sunday. “No, it’s fine. I’ve still got a little ways to go. It’s a major deal when they put in screws and plates and rods.”

Lukas said he underwent a 3 ½-hour surgical procedure to treat spinal stenosis, a “narrowing of the spaces within the spine, which can put pressure on the nerves that travel through the spine,” according to the Mayo Clinic website. Spinal stenosis, the website added, occurs most often in the lower back and neck and patients may experience pain, tingling, numbness and muscle weakness. Symptoms can worsen over time.

Lukas said he “wasn’t getting around very good” last summer at Saratoga and opted for surgery after “losing power” in his legs and finding it more difficult to stand, walk and climb stairs.

“I’m 84 years old,” Lukas said. “Hell, you get to the point where you have to make a decision on something like that or let it get worse. They told me that I had to do something, or it was going to get worse. I would get powerless like our friend Jack Van Berg, driving around in an electric scooter or something. I didn’t want to do that. I wanted to keep riding, so I had it done, and I think it really helped me.”

Lukas said he resumed riding last week, coinciding with his stable moving from Churchill Downs to Oaklawn, its winter base for more than a decade.

“Yesterday, a horse jerked me pretty good, so it’s bothering me today,” Lukas said. “I hope that’s temporary. I hope I didn’t pull any screws loose.”

During his absence, Lukas’ stable was overseen by his longtime assistant, Sebastian “Bas” Nicholl.