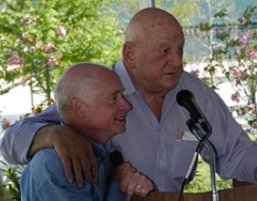 The Charles Town Races is pleased to announce that Hall of Fame trainer Jack Van Berg will be on hand at Hollywood Casino at Charles Town Races on both Friday, Oct. 18 and Saturday, Oct. 19 to promote and conduct a book signing of his biography, Jack: From Grit to Glory, released earlier this year.

The 77-year-old trainer of nearly 6,500 winners over his career will also be a special guest at the West Virginia Breeders’ Classics XXVII Breakfast of Champions which takes place that Saturday morning at 9 A.M.

The book chronicles the life and career path of Van Berg, himself a son of a Hall of Fame trainer, from his Nebraska roots through his rise in horse racing to becoming the first thoroughbred trainer to saddle 5,000 winners. After winning an Eclipse Award as the nation’s top trainer in 1984, Van Berg was subsequently inducted into the National Museum of Racing Hall of Fame in 1985. To many racing fans, Van Berg is best known as the conditioner of 1987 Kentucky Derby winner and 1988 Horse of the Year Alysheba.

Following the book’s release, Van Berg has embarked on a signing tour around the country to promote the tale of his storied career. So far, the reception the story has received has him more than pleased.

“People all around have been great, wherever we’ve gone,” said Van Berg, who has already taken his book to Hollywood Park, Arlington and Saratoga amongst other places this year. “Chris (Kotulak) did a hell of a job with all of the research and facts. People didn’t realize how hard I really had to work, but everything in that book is fact.”

This trip reminded Van Berg of some Alysheba stories. “I ran Alysheba at Hollywood Park in his first start and he got beat a bunch. Then we took him up to Chicago the next month where he ran second. I talked to Charlie (McIntosh – current Racing Secretary at Charles Town Races) after that and told him I wanted to bring my horse down there to Turfway to run in a maiden special and, heck, he wound up winning by almost 10.”

Besides the margin of victory in the race, one other thing Van Berg remembered vividly were the words of Alysheba’s rider that day, Don Brumfield. “I remember Donnie (Brumfield) rode the horse at Turfway and got off him and told his agent Donnie Richardson that he thought Alysheba was ‘just a horse’. I think he turned out to be alright.”

The son of Alydar indeed turned out ‘all right’ notching 9 Grade I wins that included the Kentucky Derby, Preakness and Breeders’ Cup Classic, over a career that banked him north of $6.5 million in earnings – a then record when he retired following his 1988 campaign. Alysheba himself took his spot in racing’s Hall of Fame in 1993.