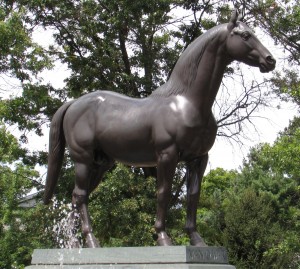 Beginning Saturday, April 8th, the Kentucky Derby Museum will pay tribute to one of Thoroughbred racing’s most famous horses, Man o’War. The new exhibit, “Man o’War: The Legacy” is an interactive exhibit covering the life of Man o’ War, his impressive racing career, his ties to the Kentucky Derby and his lasting mark on Thoroughbred racing. This month marks the 100th anniversary of his birth, near Lexington.

In 1919, Man o’ War won 9 of 10 starts including the Hopeful Stakes and Belmont Futurity, then the most important races for two-year-old horses in the United States. Man o’ War was not entered in the 1920 Kentucky Derby because his owner, Samuel Riddle, did not believe in racing at the distance of 10 furlongs so early in a young horse’s career. Instead, Man o’ War made his three-year-old debut in the Preakness Stakes where he defeated the Derby winner by  1 1⁄2 lengths. Man o’ War later won the Belmont Stakes by 20 lengths while setting a track record.

Many of the items in the exhibit were generously loaned to the museum by collector Ken Grayson. Featured items include the saddle used aboard Man o’ War during his match race with Sir Barton, the first-ever Triple Crown winner, an admission ticket to that same race and the official program from the famous 1938 match race between War Admiral, son of Man o’ War, and the legendary Seabiscuit.

“The Kentucky Derby Museum is excited to feature an exhibit on the life, career and legacy of Man o’ War. We’re especially grateful to Ken Grayson for his continued generosity in sharing pieces from his historically significant Thoroughbred racing collection with our visitors,” Kentucky Derby Museum President Patrick Armstrong said.

The exhibit will be featured in the Matt Winn Gallery through the end of the year and will be a part of visitors’ general admission experience. The Museum’s historic walking tours, which depart every 30 minutes, will also include additional information about Man o’War and his offspring’s Kentucky Derby accomplishments.