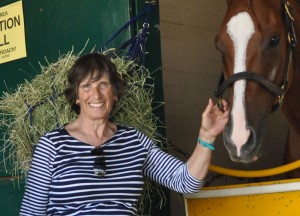 Martine Bellocq, the courageous trainer who went into the fires of hell in an attempt to save her horses last December at San Luis Rey Downs training center, has been selected to be the recipient of the 15th Laffit Pincay, Jr. Award. The prestigious honor and handsome trophy named for, and bestowed by, the Hall of Fame rider was presented to Bellocq on Saturday, August 18, the day the track runs its signature race, the $1,000,000 TVG Pacific Classic.

Bellocq, who suffered life-threatening burns over much of her body, then had to go through a series of demanding surgeries and subsequently lost a foot due to circulation complications. Despite all that, she has steadfastly worked her way back from near death in a display of strength and spirit that has amazed her doctors, family and friends.

“When I heard about what Martine went through for her horses, I knew she was meant to be honored in some way for her courage,” said champion rider Pincay. “I am so proud to be able to give her this award. She deserves it as the representative of all those brave horsemen who went to their horses instead of running the other way for themselves.”

Bellocq was joined by her family, including her husband, Pierre, as well as many of the trainers, grooms and other stable hands who released trapped horses that afternoon when a wind-whipped fire raced through eight barns at the 250-acre training site which housed more than 400 Thoroughbreds at the time. The raging blaze took the lives of 46 horses, but if horsemen had not valiantly fought their way through fire and smoke to release their penned up animals, the majority of those horses undoubtedly could have been lost in what might have become the worst fire disaster in racing history.

Also among the “heroes” who were saluted August 18 was the staff of the Trifecta Equine Athletic Center, which is located directly across the street from San Luis Rey and whose workers sheltered and treated 101 injured and terrified horses throughout the night of the fire.

The award was given in a ceremony between races on Pacific Classic Day, but the heroes were also saluted at a special Winners Foundation gathering the night before at L’Auberge Del Mar, the luxury hotel in the heart of downtown Del Mar.

Bellocq and her husband, also a trainer who was at San Luis Rey the afternoon of the fire and aided in his wife’s evacuation, come from a racing background. Pierre’s brother, Remi, has held various executive posts in the industry and currently is executive director of the North American Racing Academy in Lexington. Their father, also Pierre, is more famously known as PEB, the celebrated equine artist and cartoonist whose colorful and whimsical works filled the pages of Daily Racing Form and other publications for decades. His majestic mural depicting the history of Del Mar through its people and horses occupies a huge portion of a wall in the track’s Clubhouse entranceway. It is hoped that the 92-year-old artist will be able to join his daughter-in-law at Del Mar for her award.

Pincay was at one point the world’s winningest jockey with 9,530 victories. He rode for 39 seasons including 27 summers at Del Mar, where he is still the leading rider with 1,011 firsts. The Panamanian native was voted five Eclipse Awards as the nation’s foremost rider and led the country in earnings seven times. Now 71-years-old, he lives in Arcadia near Santa Anita and maintains his fitness and awareness of the game.