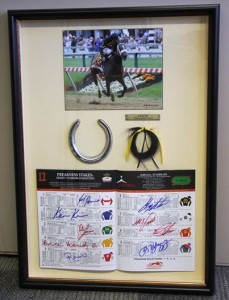 A shadow box including a shoe worn by 2013 Preakness winner Oxbow is being offered on eBay from May 11 through May 18. Sale of the shadow box will benefit Grayson-Jockey Club Research Foundation. The Oxbow auction began on Sunday, May 11, at 9 p.m. EST and will end on Sunday, May 18, at 9 p.m. EST. Interested bidders should visit eBay and type “horse racing memorabilia” in the search window.

The box also contains hair strands cut from Oxbow’s tail, which is tied with the winning colors of Calumet Farm, and Skip Dickstein’s stretch run photo, which is mounted on a raised mat. Below the photo is a brass plate with “Oxbow Preakness 2013.” The Preakness is the second jewel of the Triple Crown.

A Preakness program signed by each of the jockeys who participated in the 2013 Preakness has been mounted at the bottom of the frame.

The box has been framed by Cross Gate Gallery in Lexington, Kentucky, with a linen fabric mat liner. The glass is protected with Tru Vue Conservation Grade 99% UV protection. The wooden shadow box is stained in dark brown with a lightly distressed look and trimmed in gold. The box measures approximately 29.25 inches long, 21 inches wide and 2.25 inches deep.

This is the second shadow box to be auctioned of three in the Triple Crown series offered by Grayson-Jockey Club Research Foundation. A shadow box with Kentucky Derby winner Orb’s shoe and photo was sold for $1,250, and a similar box commemorating 2013 Belmont winner Palace Malice will be auctioned during the week of the Belmont Stakes.

“We appreciate the owners donating memorabilia from such great events in their lives,” said Ed Bowen, president of Grayson-Jockey Club Research Foundation. “They are not only benefiting equine research, but also sharing those special moments and memories.”