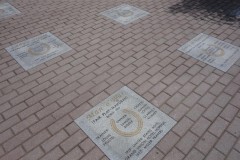 The New York Racing Association, Inc. today announced a new attraction for the 2015 meet that will honor and showcase the achievements of those who have made significant contributions to the sport of thoroughbred racing and to the advancement of Saratoga Race Course: the all-new Saratoga Walk of Fame.

The covered structure, which features the traditional Saratoga turrets and is located adjacent to the Carousel, will house a number of commemorative plaques honoring industry leaders, including owners, trainers and jockeys, who have made an indelible mark on thoroughbred racing at historic Saratoga Race Course.

The Saratoga Walk of Fame is the culmination of a new tradition which began at Saratoga Race Course in 2013 to recognize the greats of the game with an emblematic Saratoga red jacket and a commemorative plaque on the eve of the Travers, Saratoga’s signature race and the nation’s oldest major stakes race for three-year-olds. The new attraction will provide a permanent home for the plaques – and their narratives – where guests can learn about the honorees’ contributions to racing at Saratoga.

“The Saratoga Walk of Fame is our way of acknowledging and recognizing these individuals for their dedication to the sport with a place to publicly enshrine their accomplishments,” said New York Racing Association CEO and President Chris Kay. “We hope our guests will enjoy Saratoga’s newest attraction which is designed to highlight the contributions of our industry’s leading pioneers and achievers for decades to come.”

The New York Racing Association today also announced the 2015 inductees to the Saratoga Walk of Fame: prominent owners Ogden Mills “Dinny” Phipps of Phipps Stable and Marylou Whitney of Marylou Whitney Stables. The plaques for each honoree will be unveiled during the annual Red Jacket Ceremony at Saratoga Race Course on Friday, August 28, the eve of the 146th running of the $1.25 million Travers.

With roots in racing dating back to 1926, Phipps has long been an advocate for the industry as both a breeder and an owner. Thoroughbreds owned by the distinguished Phipps Stable have captured victories in some of the Spa’s most prestigious races, including the Sword Dancer Invitational, Personal Ensign, the Alabama and Travers. Earlier this year, Phipps announced his retirement as chairman of The Jockey Club after 32 years of leading the organization, establishing his tenure in the position as the longest in the history of the organization.

In addition to being a celebrated philanthropist and public figure, Whitney is one of the racing industry’s most committed supporters and top breeders as owner of the eponymous Marylou Whitney Stables, which has produced such memorable thoroughbreds as 2004 Belmont Stakes and Travers winner Birdstone who himself produced two classic winners: 2009 Kentucky Derby winner Mine That Bird; and 2009 three-year-old champion Summer Bird. Whitney and her husband John Hendrickson have donated millions of dollars to various causes supporting the Saratoga Springs community and serve as the organizers and patrons of the annual Saratoga Backstretch Appreciation Program.

The Saratoga Walk of Fame will be open to the public daily throughout the 2015 meet beginning on Opening Day, Friday, July 24 through Labor Day, Monday, September 7.