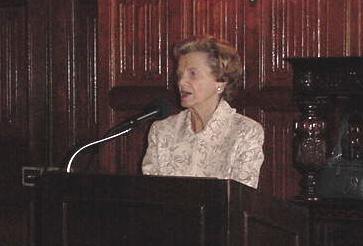 In recognition of her remarkable contributions to the sport of thoroughbred racing, the National Museum of Racing and Hall of Fame has named its Winners of the Triple Crown exhibit in honor of Penny Chenery, who died Sept. 16 in her Colorado home at the age of 95.

“Penny Chenery was a remarkable person and a wonderful ambassador for our sport,” said John Hendrickson, the Museum’s president. “She was a champion for the thoroughbred and a role model for all. It is the Museum’s privilege to recognize her contributions to racing. Secretariat was a Triple Crown champion and so is Penny. The Museum is honored to have Penny forever interwoven in the legacy of the Triple Crown within our institution.”

Located in the Kleberg Foundation Triple Crown Gallery, the Penny Chenery Winners of the Triple Crown interactive multimedia exhibit tells the stories of the 12 American Triple Crown winners, including the remarkable journey of Chenery’s Meadow Stable colt Secretariat, winner of the 1973 Triple Crown.

Chenery was born on Jan. 27, 1922 in New Rochelle, N.Y., to Christopher and Helen Chenery. Her father was a New York utilities tycoon who had a successful racing stable in his native Virginia. Chenery grew up riding on the family farm, The Meadow. With her father’s health failing in the late 1960s, Chenery took over management of the family racing stable. Christopher Chenery died in 1972, the year Meadow Stable’s Riva Ridge won the Kentucky Derby and Preakness Stakes and 2-year-old Secretariat was named Horse of the Year.

Following Secretariat’s retirement from racing, Chenery became an ambassador for thoroughbred racing and remained so throughout her life. She served as the first female president of the Thoroughbred Owners and Breeders Association and president of the Grayson-Jockey Club Research Foundation. Chenery became one of the first women admitted to The Jockey Club, helped found the Thoroughbred Retirement Foundation and created the Secretariat Vox Populi Award, annually honoring racing’s most popular horse, as well as the Secretariat Foundation, which assists and supports various charities within the racing community.

Chenery received the 2006 Eclipse Award of Merit for lifetime contributions to the thoroughbred industry and in recent years advocated for laminitis research and care advancement, as well as efforts to ban the use of performance-enhancing drugs in racing. Secretariat’s Triple Crown campaign and Chenery’s rise to prominence in the sport were featured in the 2010 Disney film Secretariat, in which she was portrayed by Diane Lane.