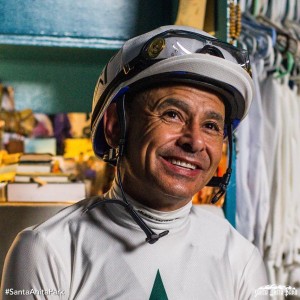 Mike Smith stunned the racing world in 2005 when he piloted Giacamo to a 50-1 upset in the Kentucky Derby, although it was no great surprise to him. If he wins the Kentucky Derby on Omaha Beach in less than two weeks, May 4 to be exact, it will have minimal shock value both in the main and to Smith, since Omaha Beach is the pre-race favorite.

The 53-year-old Hall of Fame member, among the gold standard of current jockeys, sees no additional pressure riding the favorite as opposed to a longshot such as Giacomo. After all, he did sweep the Triple Crown last year on Justify.

“Hopefully, Omaha Beach is getting better,” Smith said Sunday morning over coffee at Clockers’ Corner. “The Derby is a tough race with a tough bunch of three-year-olds, but Omaha Beach seems to be the ‘now’ horse.

“I love his running style and I love that he’ll handle mud and different surfaces, because that certainly can happen. There’s always a chance it can be muddy at Churchill (Downs).”

John Shirreffs recalls that Smith was optimistic about Giacomo’s chances on Derby Day in 2005. “He was very positive,” said former Marine and surfing enthusiast Shirreffs, best known as the trainer of the fairytale filly Zenyatta. “He said, ‘Don’t worry, John. He’s coming, he’s coming, he’s coming. Everything’s good.’ He really loved Giacomo. Maybe it was because Giacomo was by Holy Bull (the favorite in the 1994 Derby who finished 12th under Smith after breaking poorly on a sloppy track). “He realized the first day Giacomo went on the track at Churchill Downs that he liked it, and when you ship, it’s important that a horse likes the surface.

“Giacomo also benefitted from Mike’s experience. Over the years, he’s learned how to ride the Derby really well. Going into the first turn, Giacomo was a little wide and he knew he couldn’t win going wide on two turns. He had to save ground somewhere. “There was a horse in front of him going into the first turn, so he tried to get Giacomo to the rail even though it was a little close, and he did. A lot of riders might have been more cautious and not attempted that move, but I think because of Mike’s experience, knowing he couldn’t afford to go wide on the first and second turns, he had to do what he did.

“I remember people thinking Ron Turcotte moved too soon on the backside aboard Secretariat in the 1973 Derby, but in that race he had gone wide around the first turn, and Ron knew that he couldn’t go wide around the second turn as well, so that kind of experience really pays off.”

Smith and his agent Brad Pegram pondered whether to ride Omaha Beach or Santa Anita Derby winner Roadster in the 145th Run for the Roses. Smith has been the go-to guy for Roadster’s trainer Bob Baffert, who captured his second Triple Crown last year with Justify, following American Pharoah’s sweep in 2015.

“It was extremely tough,” Smith said of the decision. “They’re both live horses, and I think Omaha Beach has beaten two of the horses (Improbable and Game Winner) that probably would have been favored if he hadn’t have beaten them.

”He’s got Roadster to beat and a couple horses from New York that look really good, so it’s going to be a tough Derby, but he’s not without a big chance. Like I said, I love his running style and it suits the Derby.

“He’s quick out of there, he’ll be in a good position and then it’s just a matter of working out the trip. But is there more pressure on a favorite? I guess if you feel that way, but it all depends on the individual.