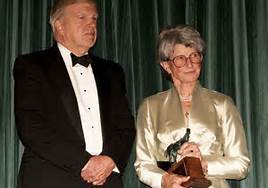 Prominent racehorse owner and noted philanthropist Gretchen S. Jackson has been named president of the National Museum of Racing and Hall of Fame by the Museum’s Executive Committee. Jackson succeeds Stella F. Thayer, who has served as the Museum’s president since 2005. Thayer will continue as a member of the Museum’s Board of Trustees.

Jackson, along with her husband, Roy, owns a 190-acre farm in West Grove, Pa., and has raced and bred thoroughbreds since 1978. Racing as Lael Stables, Jackson campaigned 2006 Kentucky Derby winner Barbaro and won the Eclipse Award for Outstanding Owner that year. Along with Barbaro, Lael’s Grade 1 winners include Check the Label, Precious Kitten and Showing Up.

A graduate of the University of Pennsylvania, Jackson is actively involved in many thoroughbred racing and equine organizations. She has sat on the Board of Overseers at the School of Veterinary Medicine at the University of Pennsylvania’s New Bolton Center since 2002. Jackson is also a board member for the Thoroughbred Charities of America and an honorary board member for the Belmont Child Care Association. She has helped raise millions of dollars for equine research and has been an active voice in the fight against horse slaughter.

“The National Museum of Racing and Hall of Fame represents so many positive aspects of thoroughbred racing,” Jackson said. “The great horses, jockeys and trainers in the Hall of Fame are all part of such a rich history and the Museum does a wonderful job of educating fans and promoting the sport. I am honored to be a part of that and I look forward to helping the Museum continue to grow and prosper.”

Thayer said Jackson is an ideal choice to lead the Museum.

“Gretchen Jackson has a tremendous passion for the sport of thoroughbred racing and she will be an outstanding leader for the Museum,” Thayer said. “Her intelligence and leadership ability will set a great tone and her work in the racing industry will give the Museum a visible and dignified presence in the sport.”

Roy and Gretchen Jackson met in high school and both attended the University of Pennsylvania. The National Museum of Racing issued this announcement by press release.