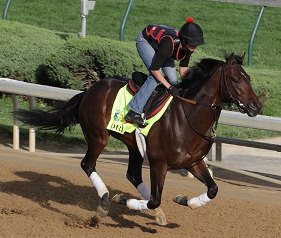 Orb working out at Churchill Downs before the 2013 Kentucky Derby

2013 Kentucky Derby winner Orb is preparing for his start in the Jockey Club Gold Cup Invitational Stakes on September 28 at Belmont Park.

Is he ready? No one is sure but he registered a second straight five-furlong breeze in 1:01 Monday, Sept. 23 at Fair Hill Training Center in Elkton, Md.

The work followed a five-furlong breeze in the same time on Sept. 14 at Fair Hill.

This 3-year-old son of Malibu Moon is still waiting for his next win. The Stuart Janney III and Phipps Stable’s colt finished fourth in the Preakness Stakes at Pimlico, and was third in both the Belmont Stakes at Belmont Park and the Travers Stakes at Saratoga.

Orb is trained by the veteran Claude R. “Shug” McGaughey, III, who had handled the previous Phipps champions Easy Goer and Personal Ensign. McGaughey began working as a trainer in 1979 and to date has won more than 240 graded stakes races. In 1986, he got his big break when Ogden Phipps hired him to train his stable of horses. In 1988, McGaughey won the Eclipse Award for Outstanding Trainer in the United States. In 2004, McGaughey was inducted into the National Museum of Racing and Hall of Fame.

Orb began his three-year-old season by winning an allowance race at Gulfstream Park over nine furlongs on January 26. Four weeks later, on February 23, Orb was moved up in class to contest the Fountain of Youth Stakes at 1 1/16 miles at Gulfstream Park. Ridden by John R. Velazquez, he won the race by half a length, defeating the odds-on favorite Violence. On March 30, Orb started as the second favorite for the Florida Derby. He was settled in fifth place before moving up on the outside to take the lead inside the final furlong and won by 2 3/4 lengths from Itsmyluckyday.